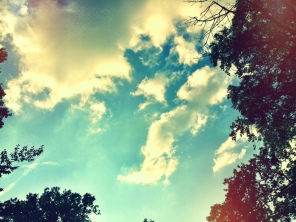 It’s been raining in Ohio. Non-stop. Sheets and sheets of rain. Morning, noon, and night. In fact, I’ve heard rumors of arks being built all over town. But today, the sun came out, the sky was blue, and it was absolutely beautiful.

Mom, Is That You?

As I was driving home, I couldn’t help but notice the spectacular clouds in the sky and my mind was consumed with how lovely the view must be from Heaven. On a day like today, there’s no doubt the angels were smiling.

It was one of those days where I felt Mom’s presence nearby – actually, I’ve felt it for a few days now, but today she was very intentional about sending a message.

Birth of an idea

A long while back, I began pondering the idea of setting up an Alzheimer’s support group at work. I’ve lost track of the number of people who have approached me, whether knowing our story directly or through a friend or friend of a friend; people who are on their own ALZ journey, looking for advice about this or that, or just needing someone to talk to.

The thought pops into my head, and then I get busy or distracted and forget about it until it pops into my head again. Yesterday something happened to make me begin thinking about it, but this time I decided to actually do something. I sent an email to one of the nurses in Associate Health Services to inquire as to whether this was feasible. Had thought ever been given to creating a group along these lines? How would one go about doing so? I’d be glad to facilitate… yada, yada, yada.

Fast forward to this morning. That same nurse (Sue) left me a voice mail message that literally had me in tears. Leading up to her call I wasn’t feeling emotional at all, but she was just one of those people with one of those voices. Her compassion was evident and the tears came easily.

This afternoon when we finally connected, she gave me some thoughts on getting a group set up. Of course, as with anything in a large corporate environment, nothing is simple, but that’s another post for another day. As we were nearing the end of our conversation, someone came in and laid a piece of inter-office mail on my desk.

As soon as I hung up the phone, I opened the envelope to find a card with a picture of my mom tucked inside. A former co-worker of hers had found it and thought I would like to have it, which in and of itself made me smile. The picture, circa 1988, was adorable – she was participating in some sort of silly office dress up day in typical Marilyn style.

But what really struck me was the timing. I never get mail, and for that to land on my desk just as I was finishing a conversation about creating an ALZ support group at the company my *Mom retired from – prompted by a call I received yesterday from another former co-worker of hers who had a friend looking for someone to talk to about her mother’s worsening ALZ. (By the way, I know that’s a ridiculous run on sentence, but sometimes there’s just no way around it. *sMiLe*)

Call it a God wink, call it a coincidence, or call me crazy, but I took this as Mom whispering in my ear telling me that I should push forward with the support group.

If only I could get her advice on the other 50 things taking up space in my brain!! ♥