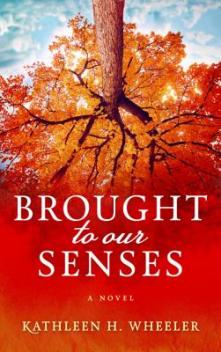 Today, I’m happy to share a guest post from author Kathleen H. Wheeler. Wheeler’s new book, Brought To Our Senses, is a fictional work that explores the importance of family and forgiveness when facing dementia.

The novel tackles the impact a messy divorce has on a family, how Alzheimer’s affects already tenuous relationships, and the excruciating journey to obtaining legal guardianship.

Wheeler writes from her own experience as a young sandwich generation caregiver in the mid 1990’s. These days, she characterizes her life in terms of BA (before Alzheimer’s) and AA (after Alzheimer’s), terms I’ve often used myself. Those of us who have traveled this road know that to say it’s a life-changing experience is an understatement.

Please join me in thanking Kathleen for being with us to share her story.

Why choose Alzheimer’s as the focus of my new family saga novel Brought To Our Senses?

It’s a fair question. After all, Alzheimer’s is argued to be the disease feared most of all. The mind-robbing illness has a bad reputation and a stigma stifling discussion in mixed company. So why exactly would I tackle such a difficult subject, one so many avoid altogether or shrug off as hopeless?

The answer is simple: Alzheimer’s has transformed my life, an existence now measured in two distinct periods of time: BA and AA. “Before Alzheimer’s” was my life until 1996 when dementia came calling for my mother with a vengeance. She was only 62, and I was 30 with a newborn daughter at home. “After Alzheimer’s” is the last twenty years I’ve spent raising two children and dealing with my mother’s diagnosis, decline, and death from this monster.

My mother passed away in 2009 but dementia lingers like the familiar nightmare waking me in a panic and cold sweat. I’ve never faced anything more difficult or devastating in my life. Like it or not, Alzheimer’s has wormed its way into my present and future thanks to genetics. I am susceptible, as are my siblings and children, and this reality drives my waking hours and efforts.

For raising awareness through my story, I was recently recognized as an Alzheimer’s advocate by the Greater Illinois Chapter of the Alzheimer’s Association during the opening ceremony of the Walk to End Alzheimer’s on September 24, 2016. It was a humbling event. So many people work to raise awareness, to change policies and attitudes, to provide support and hope that my efforts seem small by comparison. 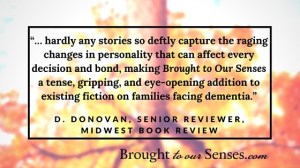 While some see my efforts as selfless, my motives are equally selfish because I advocate on my own behalf and that of my family. With all of our futures at stake, doing nothing is inconceivable. I desperately want a cure for dementia so that my children and their generation will never experience the devastation my siblings and I have witnessed. No one, whether age 85 or 40, should suffer through the tortured course of dementia.

That’s why I wrote Brought To Our Senses, and I had three goals for my book.

1 The Story: First and foremost, I wanted to tell a compelling story, one that just sucks you in from the get go. I’ve been drawn to reading and writing since I was a kid and have always wanted to write a novel. Once I grasped the premise for my book and realized what a great story it was, I just couldn’t let it go. I had to write it.

2 Build Awareness: I wanted to share the reality of the illness, from before a person is afflicted through the bitter end, and I wanted to emphasize the importance of strong family relationships to get through such an ordeal.

3 Give Back: Finally, I wanted to do something positive for the community, something that would help others struggling with the difficulties of dementia. For each copy of my book sold, I’m donating to organizations that support dementia patients, family caregivers, and research to find a cure.

I’m excited to share my book with the world and hope it will provide hope and inspiration to those touched by dementia. I’m never going back to the time “Before Alzheimer’s” and plan to look ahead and work toward a world without Alzheimer’s instead. It’s the ultimate goal for all of us who have lost a loved one to this disease. 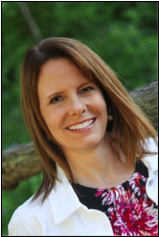 Kathleen H. Wheeler, author of the debut novel Brought To Our Senses, writes stories that sing because she cannot. A graduate of the University of Illinois, she has wordsmithed as a marketing communications professional for ad agencies and corporations since Nike first coined the slogan “Just Do It.” Wheeler is a music enthusiast and lifelong fan of a British musician known by a one-syllable nickname. Along with her husband and two children, she calls the Land of Lincoln home.

Elizabeth Miller discovers that aging parents are a family affair when her divorced mother receives a deadly diagnosis and becomes a volatile patient. Forced to work with siblings at odds through the crisis, she learns when all is lost, family begs to be found. 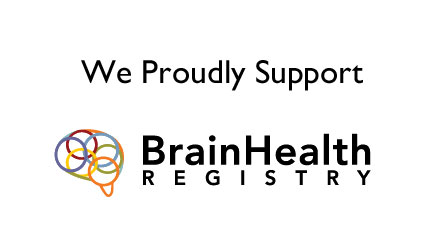