It is often said there are two kinds of people; those who have been touched by Alzheimer’s disease and those who will be. If you are part of the former group, you know how critical it is that we explore every possible avenue in our quest to end Alzheimer’s and other forms of dementia.

Did you know there is a simple way to procure additional funding for Alzheimer’s research without increasing taxes, discretionary spending, or the federal deficit? It’s called a semipostal stamp.

What is a Semipostal Stamp?

Simply put, a semipostal stamp is a fundraising stamp. Postal customers have the option of purchasing these stamps in lieu of regular First-Class stamps, at a slightly higher cost, and the additional revenue is used to raise money for a specific purpose. Semipostal stamps provide an easy and relatively inexpensive way for people to show their support for a given organization or cause.

In 1998, the Breast Cancer Research stamp was issued as the first semipostal in United States history. Since then, it has raised almost $81 million to further breast cancer research.

The Save Vanishing Species semipostal was issued in 2011 and has since raised funds to support the Multinational Species Conservation Funds.

For an Alzheimer’s advocate, the obvious question seems to be, why don’t we have an Alzheimer’s semipostal to fund research? Ask Kathy Siggins and Lynda Everman and they will tell you it certainly isn’t due to lack of trying! These two ladies have spent countless hours campaigning to make it happen…

Kathy Siggins knows Alzheimer’s all too well. Her husband, Gene, was just 57 when she began noticing small changes that worried her.

“My late husband began showing signs of needing more direction when driving to familiar places. Forgetfulness and repetitive questions followed. He always took care of our finances in a timely manner, however, as he began to struggle and wanted no help, our arguments intensified,” explains Kathy.

In 1988, dementia forced Gene into early retirement, and during the course of his illness, Kathy became a determined advocate. She began sharing their story in 1997, and when Gene died two years later, her passion and resolve increased. With that came an intense desire to raise awareness and help find a cure. Like so many grieving caregivers, she was lost, and in many ways, it was advocacy work that helped her find her way.

Lynda Everman has spent most of her adult life as a caregiver. Her journey began 22 years ago when her father began showing signs of dementia. Just a few years later, her husband, Richard, was diagnosed with mild cognitive impairment (MCI) at age 57.

“We were told the conversion of MCI to Alzheimer’s disease could occur in as little as three or as many as six years. In Richard’s case, it was 12 years. As the years passed, I began to believe that we had beat Alzheimer’s disease, that we had arrested its course, and that we would live out our lives with inconvenience and infrequent atrocity, but not the deep and pervasive sadness of constant loss that is dementia. But I was wrong. We were no match for Alzheimer’s disease. No one is,” says Lynda.

Lynda and Richard shared what she describes as “an unshakable belief in the power of the individual to make a difference and affect positive change.” As the disease progressed, Lynda’s determination grew, and she began to speak out about their experience. Soon she was attending town hall meetings and advocacy trips to her state capital.

Birth of an Idea

Just eight months after losing her husband, Kathy was attending an advocacy seminar when she first heard about the Breast Cancer Research stamp; up to that point, Kathy hadn’t been aware of the semipostal program. Now that she knew about it, if there was a possibility for an Alzheimer’s stamp, she had to make it happen. She reached out to her contacts at the USPS, and with that, her quest for an Alzheimer’s semipostal began.

In the summer of 2000, President Clinton signed the Semipostal Authorization Act into law, which gave the USPS the authority to issue more semipostals. When an RFP was issu

ed looking for candidates, Kathy was ready. Her proposal included almost 12,000 signatures along with letters from the Department of Health and Human Services, the Alzheimer’s Association, and the National Association of Retired Federal Employees.

Kathy explains, “On September 7, 2001, I visited the offices of Senator Barbara Mikulski and Rep. Edward Markey.  Each office presented me with a copy of the letter they had sent under separate cover to the USPS in support of my proposal. Sixteen members of the Congressional Task Force signed the letter from Rep. Markey.”

Less than two weeks after the RFP submission deadline, the tragic events of 9/11 took place and the semipostal program was temporarily suspended.

Ultimately, the program was cancelled, and today, Kathy’s proposal remains pending with the USPS. When the Citizen’s Stamp Advisory Committee told Kathy there wasn’t enough interest for an Alzheimer’s stamp, she set out to prove them wrong. Before it was all said and done, over 84,000 signatures had been collected.

By 2008, Kathy’s efforts and those of several key players in Washington had generated enough interest for the USPS to issue the short-lived Alzheimer’s Awareness Commemorative Stamp. Unfortunately, it went no further.

Meeting of the Minds

Meanwhile, Lynda had started her own semipostal campaign. Unaware of Kathy’s work, Lynda wrote letters to all of the living Presidents and First Ladies and anyone else she thought might have the influence needed to get the job done.

One day in 2012, while searching the Internet for information on the Alzheimer’s Awareness Commemorative Stamp, she ran across Kathy’s name for the first time. The two women with a shared passion first connected on Facebook and became fast friends.

The Alzheimer’s semipostal was introduced as a resolution in the 109th congressional session as well as the next three sessions, but it got no further. Finally, in 2013, Representative Edward Markey of Massachusetts, introduced the legislation as a bill; H.R. 1508, to provide for the issuance of an Alzheimer’s Disease Research Semipostal Stamp. Several months later, Senator Barbara Mikulski of Maryland introduced companion bill S. 1091 in the Senate.

Continuing their crusade, Kathy and Lynda wrote and hand delivered letters to every member of Congress asking them to co-sponsor the Alzheimer’s Disease Research Semipostal Stamp. Despite a valiant effort, the bill never made it out of committee.

As of this writing, H.R. 3092 has 62 co-sponsors, which is but a tiny percentage of the 435 voting members of the House. In order to move the bill out of committee and to the floor for a vote, much, much more support is needed and that’s where you come in! We need YOU to RAISE YOUR VOICE!

Look for your representatives’ name here to find out if they have already co-sponsored H.R. 3092. If you don’t see their name, CALL and ask them to co-sponsor the bill.

When calling the office, ask to speak with the Health Legislative Aide. Be certain to let him or her know you are a constituent, as they often track the issues most important to their voters. Tell the staffer how strongly you feel about H.R. 3092 and ask for the representative’s co-sponsorship. Alternatively, write a letter requesting support for the bill; remember that sharing your personal story will help convey the human side of the issue.

If you don’t know the names of your representative(s), you can get that information, as well as the direct office phone number by visiting: http://www.contactinghecongress.org.

Our friends at UsAgainstAlzheimer’s, along with their partners and allies, are also calling for an Alzheimer’s Awareness and Research stamp. To that end, they have created a simple way for you to ask Postmaster General Megan Brennan to issue a semipostal that will help fund the search for a cure. Click here to add your name; it takes less than a minute and will make a big impact! 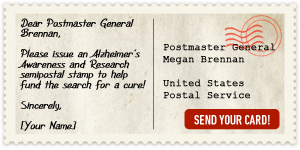 The time is NOW! All avenues for funding must be explored until all possibilities are exhausted. Alzheimer’s is the only cause of death in the top 10 in our country that cannot be prevented, cured, or even slowed. Without a medical breakthrough, a projected 14 million individuals will be living with the disease by 2050, and the cost to our country will rise to an estimated $1.1 trillion.

The numbers illustrate a compelling urgency and dire need for action, yet Alzheimer’s remains grossly underfunded as compared to cancer, heart disease and HIV AIDS. Please join the fight by taking action. Imagine the power we could harness if each of us just did one thing!