This past week, I had the pleasure of attending a screening of Still Alice followed by a panel discussion organized by our local chapter of the Alzheimer’s Association. I’d seen the film the first day of the wide release, but watching it for the second time was a completely different experience.

The event was sold out, which in and of itself felt like a victory. Just being in that space with so many people united in the dream of a world without Alzheimer’s was overwhelming.

Julianne Moore’s portrayal of Alice is brilliant, no doubt largely due to the careful research she did for the part. Last month, Sandy Oltz, Moore’s personal consultant and inspiration for the film, spoke at the Alzheimer’s Association’s Leadership Summit in Orlando. Sandy was diagnosed with younger onset at age 47. In many ways, she is the real life Alice; educated, accomplished, strong, beautiful, a wife and mother, and living with Alzheimer’s. 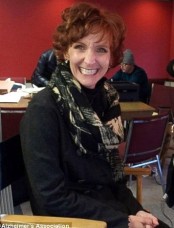 Whether or not to see Still Alice, or when to see the movie and in what setting, is a very personal decision. I had the book on my Kindle for a couple of years before I worked up the courage to read it, and then it was only because I was going to be hearing Lisa Genova speak.

If you have lived the reality of Alzheimer’s disease, this film will be difficult to watch. It will inevitably remind you of moments with your own loved one: moments of anger, frustration, and fear. But it will also bring forth memories of a love the depth of which cannot be described. A love that goes far beyond words into a realm we never knew existed.

Still Alice has the power to change the way the world views Alzheimer’s. This movie represents a breakthrough. Alice is far from the stereotypical Alzheimer’s patient, and the message is simple: Alice Howland could be any of us.

There but for the grace of God go I.

We can only hope that as this powerful film works its way into the mainstream, people are inspired to join the movement to #ENDALZ. Because at the end of the day, it’s really just about love…